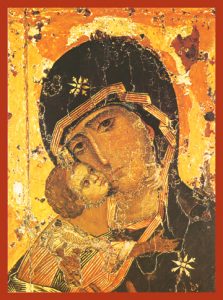 All people are made in the Image of God from their creation. (F143)  This is said in the beginning of the Holy Scriptures.  When human beings open themselves into a living relationship with God and the Church, they begin to blossom and become more and more like Jesus Christ Who is an Image of God the Father.  His Light begins to shine in them, and purify them, and cleanse them until they become living icons of Him.  (S345)  That is why they are called saints, which means holy.

They reflect His Light in them and shine with reflected glory. (S397) The Virgin Mary and most of the Apostles became holy like this, and in time many more people also became like them. (T60) They too shone with Him manifestly becoming living icons even while alive here on earth. Because they are with Him and live in Him and image Him even now, we can call on them as older brothers and sisters in the Faith to hear us because they are with Him so closely. God answers prayers, even sometimes through the Saints, but He answers them. 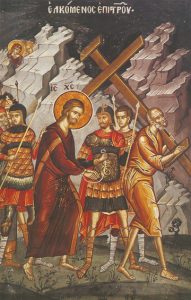 They were human like us.  They had all of the human qualities and challenges of fallen human nature like us.  They needed the same purification, avoidance of sin, and choosing the better part like us, and then they chose to follow Christ up the path to Golgotha, each in their own unique way as God led them.  They followed the Lamb of God wherever He goes, as did St. John the Baptist (S16) and we need to learn to do this too.  We are not different from the saints by nature, just by practice, and practice, and practice.  If we ask them for help in our struggles, their very frailty and humanness will encourage us to go forward and live a real spiritual life, with God present right here and right now.  Let us behold the beauty of the Virgin Mary and all the Saints as we draw near to Him!